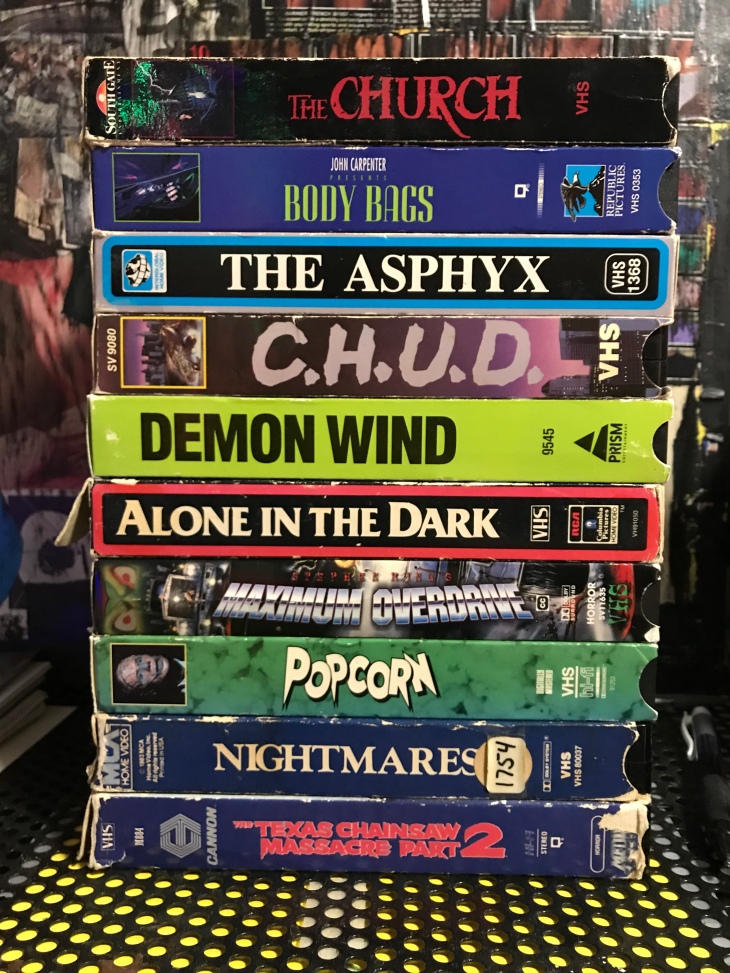 Ah. The close of another year! Social media has us pegged as basics BEGGING for the promise of success, love and heath with the approaching calendar switch. We’re all excited! However, let us just dial that back and take a moment to review the greatest memories of all: 365 DAYS OF VHS HUNTING!

My obsession with Horror movies is long established. It is my favorite genre. Period.  In 2012 I started aggressively collecting horror VHS tapes. One reason was because of the nostalgia factor in getting that black slab relic. It is THE former media platform. Additionally, it was the cheapest way to find not only my favorites but obscure horror cinema.  VHS collecting is one of those things that once you get started, you can’t stop.  An achievement I made for 2018 was reaching over 3,000 tapes (approaching 4K). NO, not all consisting of horror titles. I also enjoy thrillers, documentaries, vintage cartoons, SCFI fare.  I’m basically just a human being!

This was the year that my VHS hunting collided with goodwill bin digging. I moved to Portland Oregon over two years ago and this year was the first time I experienced the true force of the goodwill bins. You. Can. Find. Anything. Here!!!  As long as you look long enough are willing to touch needles/dried food handle people who fart around you without remorse, etc. If you look you will find it! With this new method of finding tapes. The bins are random. Rando. Completely unpredictable. One day you have a huge line up of horror then the next there’s nothing, not even a single TAPE! How! Why! I spend most of my time crying but other times I hit a HUGE load of horror favorites.

I of course continued my regular hunting rituals at thrift stores, garage sales, Ebay etc. Additionally, I made a few appearances at my old stomping grounds…. the glorious Yard Birds up in Chehalis/Centralia Washington! This list was compiled using some criteria (wild found, 1.50 or less) cause I obvs found WAY more than these ten listed. These are not even the most rare/hard to find/obscure etc but rather they are the ones that have the best lasting memories. These are the ones that I can go AH! Yes! I remember exactly when I picked that up!

So without any more fu-fu, let us decompose (mouaha) the highs and lows of unearthing golden treasures from moldy mountains and forgotten follies.  This is HORROR SLUMBER PARTY and these are the 10 VHS finds, under $1.50, that I obtained in 2018!

THE CHURCH – I moved to Portland Oregon in 2017. For awhile the tape hunt was rough. The thrift stores seldom had any exciting titles like I was used to in Olympia. I had heard of the bins…but…each time that I went it was a total flop. UNTIL, one day in March of 2018 I stumbled upon a massive bin of horror/thriller/action titles and there was The Church. Also known as Demon Cathedral this tape made me realize the bins were on FIRE for finding variety of horror slammers.

THE ASPHYX – I don’t know if staring at VHS tapes helps you in the hunt for them but it certainly manifested this one strangely. One day I was scanning the insta and this cover rolled over my screen. The solid blue lines boxing in a intriguing ghoulish being, the alluring tagline made me WANT WANT WANT! The Asphyx (pronounced Ass-fix) was now on my list. Low and behold that day I went out hunting for tapes and FOUND this film! It was strange touching something that I had just seen! Some weird cosmic destiny.

C.H.U.D. – I’m not going to lie VHS hunting in Portland is COMPETETIVE. It is a first come or you lose ENTIRELY sort of thing. Thus, sometimes a thrift shop visit or a goodwill bin foraging will result in a picked over WASTELAND. One morning I got to the tapes FIRST as I watched other collectors enter and leave empty handed. Perhaps I too missed out on other GREATS but it was thrilling knowing that I was there first. Additionally, this film was on my GET GET GET list and now in 2018 was the first time finding it in the wild.

DEMON WIND – I don’t think much else needs to be said. This is my find of the year. It is a must have for some and even I passed it up by accident, thanks to my VHS boyfriend though, it is now safely in my collection. And a favorite. Demon Wind is that late night popcorn n’ soda with pizza on the way kind of experience. If you can get it, THEN DO IT!

ALONE IN THE DARK – Has a special place in this list. At the beginning of 2018 I found this title down in Salem when I went and visited for a film festival. A film festival where one of my short independent college films was being shown. Salem is kind of cool with its apocalypse empty downtown and government buildings. It is much like Olympia in that it seems to have hidden hunting grounds for VHS. They also have a goodwill bin. However, I did not find this at the bins but at some christian thrift store – which makes it even more bizarre!

MAXIMUM OVERDRIVE – There have been DRY SPELLS this year while hunting. No tapes. Time after time. UGH. My mouth is parched. But, really, part of the fun is knowing that it can be a total bust when you are out there searching for that next big haul. During a very long dry spell I became resourceful and looked on Facebook Market Place for any local VHS sellers. One stood out to me because it had several horror titles. Additionally, 194 VHS for $25 dollars was a steal. It also happened around my birthday so some friends bought it for me. I spent $0. Gotta love the ghoulie friends that support a crazy hoarding man. In this pile of movies was Max. Overdrive. I can’t even tell you how many times I rented this film when I was kid and now I’m watching it all the time!

POPCORN – Before I found Popcorn in the wild I purchased it from a Ebay Seller. Literally a week apart. It made me LAUGH so hard when I found it face up in a pile at the bins. It is just fitting that I would spend over $10 dollars for a tape and here it is for less than two dollars. I do most of my hunting for VHS in the wild but will now and again purchase a FAVE from the internets. As I continue to grow my collection I wonder if I should just skip online and go completely hog WILD. Sidenote: I have been finding this film in the wild over and over again. The most recent time was a coverless hollywood video rental.

NIGHTMARES – I think some of you may now know one of my guilty pleasures. Anthologies. I love having back to back horror tales to keep me twisted. Hello, I am Horror Slumber Party after all. What makes this find so special is that I found it in a bin of glassware. Completely random. It had been someones toss away. The rush of finding a VHS is exhilarating even more-so when it is in a random place. Like it was just put there for you. To find. To love. It’s all about DESTINY babies.

THE TEXAS CHAINSAW MASSACRE 2 (CANNON RELEASE) – I end this list with one of my favorite films of all time and a film I have in other releases. This tape is special because I found it at one of my favorite places to dig for slabs. The Yard Birds Shopping Mall in Chehalis Washington! AKA the place I’ve been buying VHS since I was a kid! I probs shouldn’t give away one of my golden secret spots for VHS collecting as Yard Birds is why my VHS collection is so meaty. But, I don’t live as close anymore and can only visit on special occasions, so lets VHShare. The last time I went I found this glory gory. Shucks, still in 2018 the big ol’ bird shopping mall is pulling out all the stops.

HONORABLE MENTIONS: All of the black cases from hell which included Night Of the Demons, Basket Case, Sorority Girls and the Creature from Hell, ToolBox Murders, Gorotica Gorwhore, Gorgasm, Blood Splash, The Unnameable 2, Haunted Fear, Teenage Exorcist, Graduation Day and others. This was arguably my biggest Horror Haul of the year. The guy who sold me the tapes said he might know where the slips are. Cross your fingers for me in 2019!

VHS Collecting has given me so many fond memories this last year. It is something I do in the midst of terror in my own life that gives me much needed clarity and peace. It gives me a release. At times a purpose to keep these titles alive. I am a part of that collecting world. To see their faces smiling with their prized acquisitions is additionally a great treat to appreciate about the closing year. Thanks to all my ghoulie pals for following along and heres to 2019 and bringing in more tapes to this slumber party.

PS ….There might be an additional follow up ! As there is still a few days for collecting!